WP 4 partner meeting in Bonn: Development of a detailed concept for the integration of AgriPoliS and FarmDyn using surrogate modelling

Models of individual farm decision (IDM) like FarmDyn that are capable of reflecting detailed technology choices, investment decisions, and biophysical linkages are necessary to analyze the upcoming CAP where environmental impacts are considered to play a crucial role due to the laid-out targets of the EU-Commissions “European Green Deal” and the “Farm to Fork Strategy”. 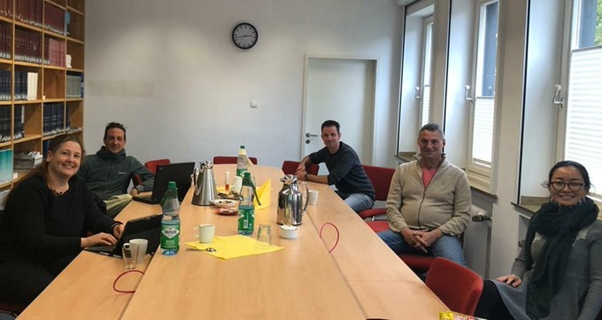 At the same time, policy outcomes crucially depend on interactions between single farms on the land market, spatial knowledge diffusion processes, or spatial environmental effects that emerge from the decisions from a group of farms - which single farm models fail to consider. Agent-based models like AgriPoliS are well suited to model such interactions. Task 4.5 aims to exploit the potential of deep learning to develop and implement a surrogate modelling approach which will integrate FarmDyn into AgriPoliS. The integration of these two models through a surrogate model will be an important contribution to the MIND STEP model toolbox. It will enable researchers to run experiments of various policy scenarios and analyze their environmental impacts on regional level much faster without losing too much detail from the farm level.

Even though the MIND STEP consortium meeting was only a week ago, the partners involved in Task 4.5 met in Bonn to spend a week  (12th to 16th October) intensively discussing details on the planned integration of the two models to establish a solid basis for further cooperation. As a result, UBO and IAMO came up with a concrete working plan in terms of regional adaptation, alignment of inputs and outputs of the two models, data generation, and training and integration of the surrogate model.

It was a great chance to officially introduce the new WP 4 leader Hugo Storm, taking over from Thomas Heckelei who has been appointed as the Dean of the Faculty of Agriculture of UBO. Hugo Storm is an expert in the field of structural change and surrogate modelling and has been involved in MIND STEP since the writing of the proposal.